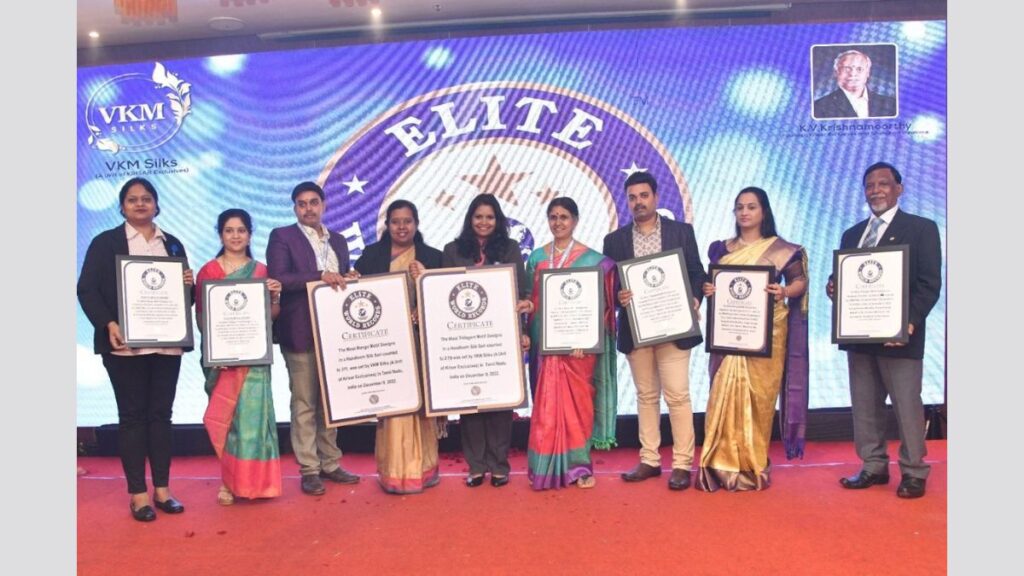 New Delhi, December 14: VKM Silks pioneer Handloom Silk sari manufacturers in Tamil Nadu headquartered at Arani in Tiruvannamalai District. VKM Silks a legacy of more than 6 decades in Handloom Industry, associated with more than 1000 weavers work 24×7 to come up with new and unique every day, to make a mark in women’s traditional and fashionwear international. They bagged recognition in to Elite World Records,Asian Records Academy,India Records Academy and Tamilan Book of Records for the titles “Most Mango Motif Designsin a Handloom Silk Sari” and “Most Thilagam Motif Designs in a Handloom Silk Sari” during the citation ceremony held at Hotel Fortune Park(ITC) in Vellore on December 9, 2022.

K.Arun,MD-VKM silks, proudly stated, “We are into this business for fourth generation and we always stand unique from other manufacturers and suppliers by design, quality, price, and delivery. We always aspire for something new and innovative in the market which keeps us identified in the handloom silk industry. With the thirst and urge of bring out something very unique and exclusive, our research team had a detailed review since early 2019 and came out with an exceptional idea of manufacturing a handloom sari with maximum mango motif designs and another one with maximum thilagam motif designs. Our designing team worked hard for about 6 months to complete the art work of the sari and then the manufacturing of sari commenced with lot of curiosity. Our extensive hard work now gained us recognition in a global platform by way of world records. I dedicate it to my father Late.K.V.Krishnamoorthy who is guiding force to us in all means.”

Aishwarya Arun, VKM Silks, detailed that, Handloom saris are considered a traditional textile art of India. The handloom weaving process requires several stages in order to produce the final product. It starts with designing the art work, making the punched cards for loom, then it goes to the loom for warping, sizing, attaching the warp, weft winding and then weaving. In general Completion of a single handloom sari takes seven days of work in the loom, but both these saris have taken 60 days each to get completed. This limited-edition sari has come out very well and we are glad that it has accomplished Elite World Records for its uniqueness, she said.

Bhavana.R, Adjudicator-Elite World Records detailed, today we witnessed a handloom silk sari made with Pure Organic Silk, Gold and Silver Zari crafted with 311 mango motif designs, after a detailed examination we found that all the 311 mango motifs are unique and different from each other. This sari is a masterpiece. I wholeheartedly appreciate the efforts of VKM Silks and K.K.Arun(MD) for bringing out this unique sari and I am to certify this, further she stated.

G.K.Sowjanya,Trainee(RMT)-Elite World Records, detailed that Indian handloom not only depicts our rich culture and heritage but also describes the imagination and experience of artisans carved on a blank canvas. Indian handloom has gone through tremendous revolution in terms of innovation and modernization, the handloom silk sari manufactured by VKM Silks is one among it. The Sari made with 279 thilagam motif designs made with gold and silver zaris along with organic silk is extraordinary, and I am happy to certify this, she said.

Dr.A.K.Senthil Kkumar, Ambassador-Asian Records Academy, detailed that Handloom weaving constitutes one of the richest and most vibrant aspects of the Indian cultural heritage. The strength of handloom lies in ease of introducing new designs, which cannot be replicated by the Power loom sector, the two handloom saris manufactured by VKM Silks is unique and first of its kind in the world and I am happy to certify them, he further said.

P.Jeganathan, Senior Records Manager-India Records Academy, detailed that. The level of artistry and intricacy achieved in the handloom fabrics is unparalleled and certain designs are still beyond the scope of modern machines. One such intricacy is now achieved by VKM Silks by making saris with maximum Mango Motif Designs and Thilagam Motif designs, I appreciate them for their achievement, he further stated.

Dr.B.Balasubramanian and U.Nagajothi, Tamilan Book of Records, stated that Handloom is known for flexibility, versatility and innovativeness, the saris manufactured by VKM silks is highly artistic and exceptional, we appreciate their efforts, they further stated.

The event witnessed a mass gathering from the textile industry and all the spectators were astonished on seeing the artistry handloom silk sari of VKM silks and appreciated their efforts.