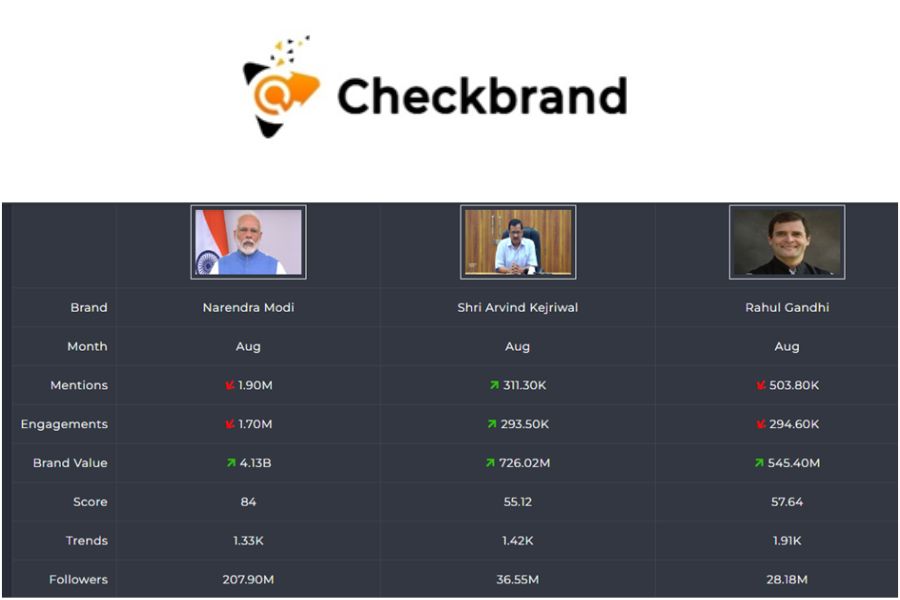 Mr. Modi’s brand value shoots up by 86 Crores in compliance with the 2020 evaluation

Assessed by none other than CheckBrand, a Sentiment Analysis & Digital Ranking Firm

New Delhi, October 1: CheckBrand has released data analyzing the online sentiments for top politicians in India and evaluated more than 100 million online impressions for the report. One of the most impactful and new trendsetters on various digital platforms, such as Twitter, Facebook, Google search, Wikipedia, YouTube, Instagram, Google Trends etc., is the famed politician across the world – “Narendra Damodar Das Modi”.

Even in the face of fierce resistance from numerous Political & Social groups, Prime Minister Modi has emerged as the most powerful leader. Prime Minister Modi has changed the political brand anomaly once again by making a humongous jump with a jaw-dropping 413 Cr worth of ‘Digital Brand Value’, in 2022. The figure is 86 Crores higher than the last valuation in 2020, assessed by CheckBrand, an innovative digital platform to measure & enhance political brands and ministries.

CheckBrand’s initial evaluation, completed in October 2020, determined that PM Modi was the most popular politician, with approximately 100 trends related to him circulating in the public sphere. The study, which was done in the second quarter of 2020, included the top 95 political figures as well as 500 renowned figures. According to CheckBrand, over 10 crores of data from various digital platforms were decoded, and PM Modi scored a 70% Brand Score &327 crores digital brand value in 2020.

Mr. Modi’s brand worth has boosted significantly since 2020, despite unprecedented opposition from a range of social groups, including massive farmer protests across India over new farm policies; Mr. Modi has been able to cope with this extreme hostility remarkably by reversing them.

Speaking on the sentiment analysis, Mr. Anuj Sayal, MD, ADG Online, and CheckBrand.online, said, “The mentions for Narendra Modi were the highest, and engagement was in the top three politicians due to the “HarGharTiranga” campaign which invokes the feeling of patriotism in the hearts of the people and promoted awareness about the Indian National Flag.”

Amit Shah and Arvind Kejriwal hold the other two places among the three politicians.

Union Home Minister Mr. Amit Shah has maintained the same position as of 2020, i.e. second on the CheckBrand political catalogue. Though his Brand value has increased as compared to 2020, diving deep into the data in terms of engagement, reach, and sentiment analysis, CheckBrand concludes Mr. Shah’s brand worth is 96.8 Cr which was previously 88.2 Cr.

Examining the social media platforms, CheckBrand found that with close to 5 Million followers on Instagram, more than 30 Million followers on Twitter along with 4,007,136 views on Youtube, Mr Shah is rising high on social media platforms creating his own impact. He has gained humongous popularity all over the web by highlighting his official visits and daily activities on digital media.

Chief Minister Of Delhi has secured the third position on the CheckBrand catalogue of Top Politicians. Within such a short span of time, he has generated tremendous discussion on digital platforms after becoming the Chief Minister of Delhi thrice. With 26.1 Million followers on Twitter, over 1.5 Million followers on Instagram and 9.1 Million followers on Facebook Mr. Kejriwal is creating his impact on social media. CheckBrand deep-dived into the data and worked upon the key metrics using our algorithm; hence Mr. Kejriwal has a Digital Brand Value of 72.3 Crores which has increased from his Brand Value i.e. 61.7 crores in 2020.

On the other end of the spectrum, CheckBrand, opposition party leader Rahul Gandhi has seen a significant drop in his stats. Being a centre of controversies, Rahul Gandhi has been a part of the limelight for the last few years. Whether it is pointing out the ruling party in the parliament house or praising congress benefits to the citizens, Rahul Gandhi knows how to leave his mark.

Mr. Modi is placed fourth overall in all relevant categories defined by CheckBrand, which features Actors, Politicians, Brands, CEOs, CMs and Cricketers. Setting against him in the steep competition are Nike (brand), Samsung (brand), and ViratKohli (cricketer). One of the reasons PM Modi lags behind the trio is due to negative sentiment constantly being directed at him by the opposition parties and their followers. It, of course, comes with the territory of politics.

Studying further on the algorithm, CheckBrand determined the online presence of Nitish Kumar, Mamta Banerjee, and Priyanka Gandhi Wadra, who have emerged as strong potential candidates for the PM position in the next Elections. Currently entrenched as CM of West Bengal, Banerjee has become very popular amongst the citizens. CheckBrand has Banerjee’s brand value listed at 23.7 crores. Another challenger for the PM position Priyanka Gandhi Wadra ranks 13th in CheckBrand Politicians Catalogue. She was very active during UP elections, spoke a lot about woman empowerment, and built a soft corner in the hearts. Further stating about Nitish Kumar, This year turned out to be a different ball game for him, particularly after his latest U-turn. The senior-most and getting mandate on governance, Nitish could outstrip all other regional political satraps as the opposition’s PM candidate. His digital Brand Value is 18. 91 Cr.

Further, CheckBrand also analyzed the data of Ministries and detected that the ‘Brand Value’ of Ministries has risen to the top of the rankings alongside political figures. With a huge fan following in the digital space, the ministries of the Indian Government have marked their all-time high digital rankings.

CheckBrand, as an AI tool, provides all the inputs required to increase prominent figures’ and ministries’ online engagement, visibility, and reach to the public. With the assistance of CheckBrand, the Ministry can completely know how to improve its digital ranking and reach the top. CheckBrand examines and gives their ‘Digital Ranking’, ‘Brand Value’, ‘Brand Score’, ‘Sentiment Analysis’, and ‘Audience Engagements’, and eventually ensures their absolute ‘Digital Presence’ based on the data.

As per MD Anuj Sayal, “CheckBrand is a really intriguing tool that operates outstandingly. It gets information from the web and quickly transforms it into something that brands are actively building, which is their ‘Digital Brand value’. In reality, it assigns them their ‘Digital Ranking’ based on an analysis of the data obtained. Another intriguing feature is that it offers an opportunity to create a brand rather than just enhancing an existing one’s digital worth.”Contact: ADG Online Solution | https://www.adgonline.in | +919289134383 | info@adgonline.in

Dr. Amit Nath is awarded the Degree of Doctor of Business Administration at a reputed event at Taj Palace, Delhi for his expertized achievements...