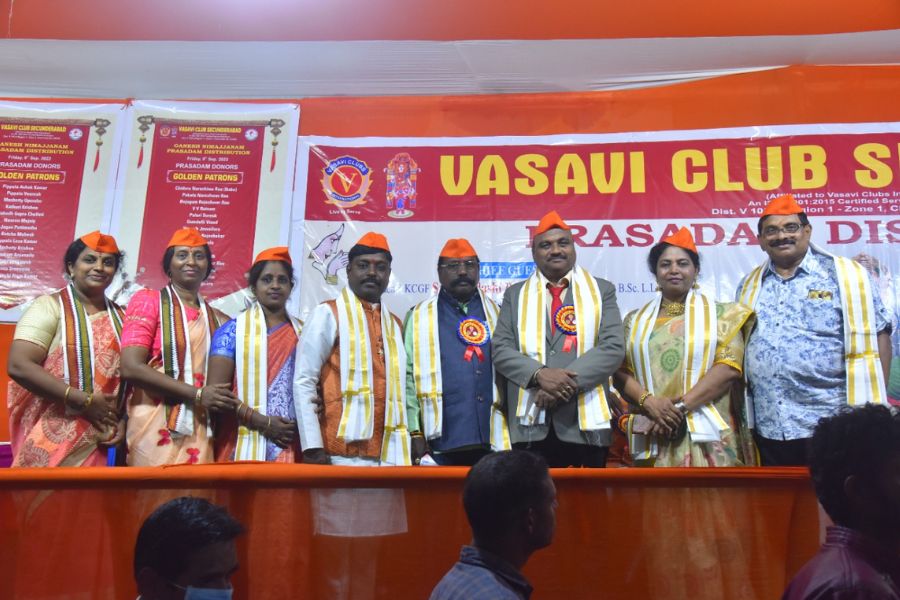 Mr.Subodh Gupta Cholleti informed that we have been organizing devotional programs, Awareness Programs type of events apart from service activities like Donation camps and Food donations that we organize from Vasavi Club. Our motto is “Serve to Live” to be a change makers in the society for a better world and to make a better place to live in. “

Mr.Subodh Gupta Cholleti has also mentioned that this year Vasavi Club Secunderabad Chapter has taken the initiative to empower youth via skill development and installed 3 Computer Training Centres also, to support women empowerment, they had setup Sewing Machine training centres for housewives. Apart from that, the chapter members have organized various charity activities like the Donation of Almaharas to old age homes and orphanages in the city and also donated Two wheelers to Handicapped. Supported School kids for their education in the form of scholarships.

Vasavi Club Chapter Members have participated in the program and made the Program a Grand Success.

Share
Facebook
Twitter
Pinterest
WhatsApp
Previous articleWe are going to talk about one such person only. We will talk about the founder of India’s 1st B2B healthcare ecosystem, “ClickManager” Subhajit Chattarjee
Next articleEZOK Launches Exclusive Collection At Venus Steps, New Delhi

Rising global movement of 1.8 billion young people calls for change for their health and well-being

Keeping Ayurveda alive, Sona Healthcare is a one-stop solution to all your healthcare needs